The Art of Making a Cover

The kindle version of the last Romance Arts book is now available for preorder. As usual, I rejected quite a few covers on the way to the one currently gracing The Art of Friendship. A few of the ideas didn’t work out the way I pictured. And a few of the ideas were just bad ideas. I’m not above admitting I sometimes have bad ideas. I’m not even above making fun of my ideas. 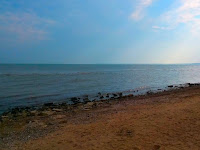 Let’s start with the original picture. That’s Lake Erie, if anyone is curious. I think an Ohio resident could be inspired to paint a great lake. But how would she make it kooky?

My first thought was a monster lurking beneath the surface, something the viewer wouldn’t notice right away. I pictured something a little like a giant catfish with all those creepy spikes coming out of its head. I knew there was a problem even while I was imagining the beast. I can’t draw. The graphics software I use doesn’t have a “sea monster” effect. It’s very old. It doesn’t even have a “magically blur the bad drawing into a murky creature” effect. 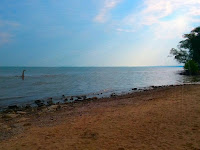 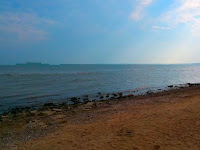 Then I had an idea about tweaking the horizon, making it somehow unnaturally-shaped. I tried tilting it, which only looked like someone had tilted the painting. Yes. I should have seen that coming. I tried warping the horizon in a small section. That looked like an island. Is an island in Lake Erie kooky or original? No. God did that a long time ago. My best version was this odd jagged line. It’s… bad idea number two. 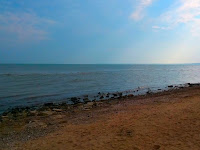 I tried to turn some rocks into music notes. My test audience thought they were weird birds. It’s only clear they are notes when zoomed in. Audra’s pictures are things that could appear in nature but don’t. I wish I’d remembered that before I spent I’m not going to tell anyone how long making note-shaped rocks that look like birds.

Lightning on a clear day would be unexpected. And it was at least fun. I zapped different parts of the beach and kept changing the size and hue of the bolt. Some of my lightning looked awesome, but I couldn’t get any of it to blend, to fade into the rest of the scene. I asked myself how I could make the lightning more subtle. Obviously, it needed to be off in the distance. Where there might be clouds. That either ruined my idea of forced me to see that it was bad. Back to the drawing board regardless. 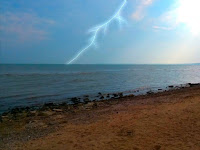 For a while, I thought the sand on the shore was the key. I tried stacking it and adding ripples. Sand is pliable though. Everything I did just looked like someone was playing in the sand, which was exactly what I was doing in a digital sense. I returned to the water for the idea I used on the final cover. I think it was a good idea. I have a few of those, too. I hope readers agree.

The Art of Introductions - CWG Seal of Approval, 2021

This four-book series is set in a fictional town in Ohio, where many place names come from Native American words. Andauk is the Wyandot word for four.

They See a Family

This one isn't part of a series, though it does have a short prequel called The Study Group.

This series features a concurrent timeline. It was fun to secretly tuck the characters into each others' stories. Details are in this post, but you might want to read the books first.